With the serene Avon River flowing through the heart of Christchurch, it’s no wonder river punting is a popular pastime here in the largest city on the South Island. Gliding along aboard handcrafted flat-bottomed boats with a skilled Punter replete in Edwardian attire, it’s a civilised way to admire Christchurch – a city on the move, thanks to Herculean efforts in rebuilding this charming city after the devastating earthquakes in 2010 and 2011.

A city rich in history and culture, gorgeous heritage buildings are complemented by modern, innovative delights. It’s fascinating to see the changing face of the city, with significant urban regeneration efforts after many historic buildings were destroyed. The Cardboard Cathedral, a temporary replacement for the Christ Church Cathedral decimated in the quake, is made up of 98 giant cardboard tubes, shipping container walls and a translucent polycarbonate roof. The earthquake-proof building is designed to last for up to 50 years.

The heritage tram is a charming way to take in the city’s sights and landmarks and there’s even a Tramway Restaurant in operation. And like many great New Zealand cities, of course there’s a gondola for a prime vantage point over the city!

Visitors will find plenty of architecture to gawk at here, with beauties like the Victoria Clock Tower (made in England in 1860) and Riccarton House, an elegant Victorian/Edwardian homestead. The Isaac Theatre Royal is the country’s only operational Edwardian-style theatre. Opened in the early 20th century, it was extensively restored post-earthquake. New Regent Street, a buzzing pedestrian mall jampacked with cafes and shops, is a visual delight with its Spanish Mission buildings.

There’s no shortage of interesting places, like the Air Force Museum of New Zealand, or the International Antarctic Centre, with an indoor Antarctic Storm simulation room and even some resident little blue penguins to admire. For more insight into the icy continent, the Canterbury Museum holds the world’s largest collection of Antarctic artefacts.

A visit to the Christchurch Botanic Gardens, established in 1863, might help to understand the city's affectionate nickname Garden City – the rose garden alone features 250 different kinds of roses.

Christchurch boasts a thriving art scene, and the Christchurch Art Gallery is a great place to start, with an extensive public art collection, as well as other New Zealand and international works. Entry is free.

Of course the hiking trails are top notch – this is New Zealand, after all – and Godley Head is the jewel in the crown. This nationally significant heritage site served as a coastal defence during World War II and the eight-kilometre scenic loop track is known for its coastal views and thrilling glimpses of wildlife, like dolphins and penguins.

Other outdoor pursuits are centred around the Port Hills, between Christchurch and the port of Lyttelton, with plenty of parks and mountain bike tracks, like the cross-country biking adventure around the rim of an extinct volcano.

When you’re ready to get out of town, the TranzAlpine train journey from Christchurch to Greymouth takes in beautiful alpine landscapes as it journeys through the famed Canterbury Plains and the Southern Alps towards the wild West Coast region. The Coastal Pacific scenic railway heads north along the breathtaking Pacific Coast making its way to Picton, with an open-air carriage to enjoy the fresh air along with the views. 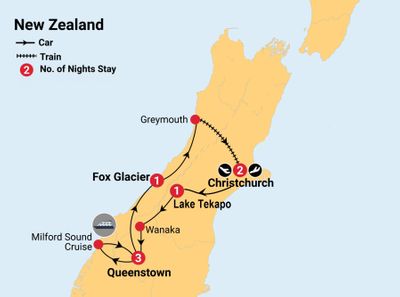 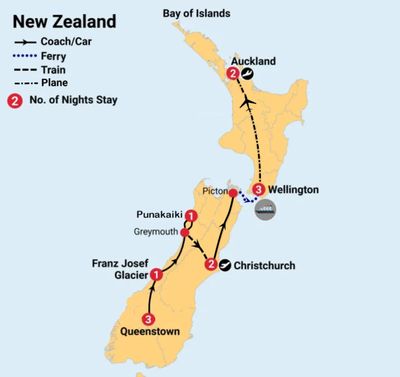 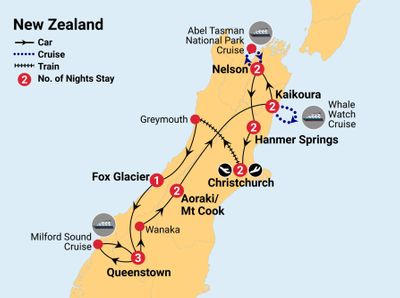 Destinations Auckland, Rotorua, Napier View Tour Details
LOAD MORE Use the search bar at the top to SEARCH for your preferred destinations
Processing...
You appear to be from