Why is Finland the happiest place on earth?

Finland regularly tops the international league table as the cleanest, greenest and happiest place on earth. A high density of forest and a low density of people helps keep this nation green but a socially aware, environmentally forward thinking government combined with a culture born out of nature, makes Finland an inspiring country.

Finland is the cleanest and greenest country on earth – that’s official. It ranks number one out of 180 nations in the Environmental Performance Index with a score of 90.68 out of 100. Produced by the Yale Centre for Environmental Law and Policy, it measures factors such as management of water resources, agriculture, forests and fish stock as well as the quality of air and water.

An incredible 71% of Finland is made up of pristine forest, which makes it the most densely forested country on earth by the percentage of land mass. Add to that another 10.2% of the country’s surface area is lakes – a whopping 187,888 of them – and suddenly it becomes clear why there is so much appreciation of natural beauty in the country. Then take into account that more than 80% of these lakes are in ‘good’ or ‘excellent condition’ and it becomes clear that so much of the country has remained untouched by industry and man-kind’s far too often, destructive behaviour.

Forests are earth’s natural air purifiers so it comes as no surprise that the air in Finland is the cleanest on earth with a concentration of fine particles of less than six micrograms per cubic metre – that’s quite something when compared with an average of 115 in Pakistan.

This environment of natural abundance had been influenced the way of living of the Finnish people and spending time outside, hiking through forests, foraging in woods or just going for a walk and some fresh air is part of the culture. There is, in fact, a word - jokamiehenoikeus - which means ‘freedom to roam’ and allows anyone to explore any part of the country – public or private.

Whether it is enjoying ice-cold dips in a frozen lake or a steaming sauna in a wooden hut, the Finnish people are much closer to nature than many of their European neighbours. Because of this, the people are eager to protect this much-loved environment rather than feel they only conform to government rulings about recycling or other environmental laws.

While the people are eager to do their bit to keep the country clean, the government too are world leaders when it comes to clean and renewable energy use. The country is the second in the world (after neighbouring Denmark) when it comes to producing the least amount of carbon dioxide per capita. They already produce nearly two-thirds of their electricity from renewable or nuclear power sources and have pledged that 38% of energy production will be renewable by 2020. In fact, they have also said that the country will be carbon-neutral by 2050.

Gas guzzling cars are also on their way out as the capital city Helsinki has said it will be free of all motor vehicles by 2025. Instead they are increasing the quality of their public transport system, and further add to the already 2,400 miles of cycle lanes. Parliament has also stated that by 2029, at least 30% of all road traffic must run on biofuels – that’s fuels made from things like plant oils rather than fossil fuels.

A lot of the country’s excellent environmental awareness comes from their incredible education system. A couple of generations ago, Finland’s education system was ranked among the lowest in the western world. Today, it’s number one. Much of this is based around the theory of equality. There are no public and private school – in fact, it is illegal to establish a school that charged tuition – so kids from all backgrounds study together. Cooperation is preferred over competition and a focus is put on working to students’ strengths and interests, rather than being forced to learn standardised tests. Students in Finland have no homework, the shortest school days and the highest number of holidays yet still have the best education in the western world – something a lot of other countries could learn from.

Fund for Peace – a US non-profit – ranked Finland the world’s most successful country “socially, economically and politically.” Economically the country sees a solid GDP growth (of 2.1% in 2016) and politically, it’s parliamentary democracy is ranked as one of the most “stable, safe and free” in the world. It also comes 15th in the Global Peace Index – showing incredibly low crime rates and was the first in the world to give women the vote in 1906 – 12 years before the UK, and 14 before the US.

Finland may be famous for its high personal tax rates, which have always hovered just over the 50% mark for top earners but Finland’s tax rate isn’t even the highest in Europe (France wins that title). That tax money though is incredible well spend. As well as free education from kindergarten to university, there is high-quality universal health care, long maternity and paternity leave, as well as excellent pensions and disability benefits.

The disparity between the ‘haves’ and ‘have-nots’ in Finland is also marginal thanks in no small part to Finland being ranked at the top of the social mobility scale.

The wage gap between bosses and employees is lower than most countries and there are an incredible 19,000 government and non-government social enterprises that help provide training, getting people back to work and create a sustainable business for entrepreneurs.

Another myth is that Finland’s long dark winters lead to a higher than average suicide rate, but in fact, suicide rates in Finland are average for Europe and, according to a recent UN World Happiness Report it is the second happiest country in the world (again, after Denmark). A stable, progressive government, combined with a love and appreciation of nature shows that we can all take a lesson out of Finland’s book. 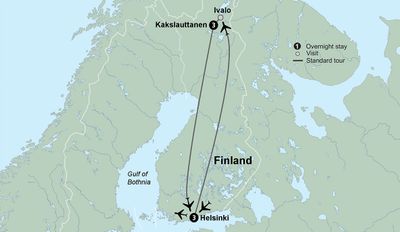 Destinations Ivalo, Helsinki View Tour Details
Use the search bar at the top to SEARCH for your preferred destinations
Processing...
You appear to be from