With only 600 inhabitants, Şirince is one of Turkey’s most idyllic villages

The village may be small but it has a big history. Legend has it that it was built by freed Greek slaves who originally named it Çirkince – meaning ‘Ugly’ in Turkish to put people off from following them.

An account from 1650 states there were only 18 tax-paying individuals living in the village at the time, who were all Orthodox Christians. This was backed up in 1699 by the British priest Edmund Chishull, who confirmed it was a Christian community when he visited.

Two churches are physical remnants of this Christian era. The 18th-century Church of St Demetrius is found at the northern end of the village and although neglect has left it open to the elements, it is surprisingly intact with impressive frescoed vaulted ceilings and marble floor. The larger and more impressive Church of St John the Baptist dates back to 1805. Although it too has been neglected, its structure remains solid and charitable donations have helped preserve and renovate its Byzantine wall frescos and preserve much of its original character. A wishing well and statue of the Virgin Mary can be found by the entrance to the church.

Most of what is seen in Şirince today dates back to the 19th century but the village was repopulated by Turks in the 1920s after a population exchange between Greece and Turkey took place. A major shift took place at this time, from Greek Christian to Turkish Muslim, which saw the Church of St Demetrius turn into a mosque in 1923, and the town’s name change from  Çirkince (Ugly) to Şirince (Pleasant) in 1926.

Sadly, after the 1920s, many of the Greek buildings fell into disrepair. But after the village was declared a national heritage site in the 1990s many of the ruined historic houses have been renovated using original materials and building techniques.

This has created a stunning series of stone houses, with ornate wooden doors and red-tiled roofs that sit perfectly in the stunning natural landscape, dotted with apple and peach trees and vineyards. With its cobblestoned streets, the village today looks and feels as it may well have done in the 17th-century when only a few hundred Greek orthodox Christians lived here.

The owners of the Nişanyan Hotel have been instrumental in renovating many of the old homes and turning them into cottages for guests accommodation. The restaurant at the Hotel is arguably the best place to eat in town with dishes made from local produce – some from its very own gardens. And it’s a great place to sample some of the locally made fruit wines that have been made in the same way since the Greeks brought the technique to the area over 400 years ago.

The town can get busy in the day time with day-trippers and many souvenir shops and stalls can be found in the village market and Café Sedir is a great place to stop and rest with some sweet Turkish tea. 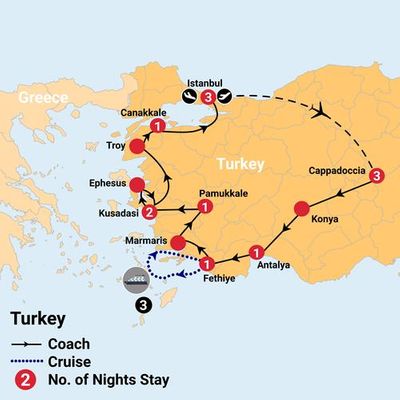