The Wild Atlantic Way runs from north to south along the west coast of Ireland and is one of the most stunning drives in the world. The rugged natural landscape provides breathtaking views across the Atlantic, panoramic sunsets over rocky beaches and eerie mists rising off foggy mountains. But it's the Cliffs of Moher, almost exactly halfway along the Wild Atlantic Way in County Clare, that are the highlight of this 2,500km stretch of the coastal road.

The Cliffs of Moher were named after an old fort, which was demolished during the Napoleonic Wars of the 1800s. Mothar in old Gaelic means the 'ruins of a fort’.

The cliffs rise up 214 metres from the awe-inspiring waves of the Atlantic, where the immense power of the sea can be witnessed. In fact, one of the world’s most terrifying surf sites can be found here. Aileen’s is said to rival Teahupo’o in Tahiti or Pe’ahi in Maui and attracts hardy surfers who visit Moher to tackle the terrific power of the sea.

For us mere mortals, a coastal path provides all the excitement we need. Hikers can walk along as much of the 18km clifftop path as they like. Running from Hags Head in the south to Doolin in the north, most people start at the Visitor Centre at the midpoint and pick either the southern or northern route.

The Visitor Centre took 17 years to complete and is built into the earth. It has a minimal environmental impact with geothermal heating and cooling, solar panels, and greywater recycling. Inside the centre are videos showing a birds-eye view of the cliffs, as well as the underwater caves beneath the surface.

While Moher Tower, an old stone ruin of a Napoleonic watchtower, is found at southern Hags Head, it is O’Brien’s Tower that is most iconic and most visited. Located beside the Visitor Centre, it was built in 1835 by local landlord Sir Cornellius O’Brien as an observation tower for visiting tourists – the original Visitor Centre, if you like. It also hosted a tea house and allowed people a panoramic view of the cliffs from the top.

Another stunning viewpoint is from the sea. A number of boat cruises give a sea-view vantage point of the cliffs, granting views of sea life such as seals, porpoises, dolphins, minke whales and even basking sharks in the right season. Moher is also known for its thousands of pairs of Atlantic puffins that nest in the crags in the cliffs. These small black and white, orange-billed sea birds can be seen diving into the waves to catch small fish.

Taking one of the regular ferrys to the nearby Aran Islands offers another view of the Cliffs. A day trip to the islands is a great way to experience rural life in Ireland – unchanged for centuries. It’s also the place to pick up a famous wool sweater. 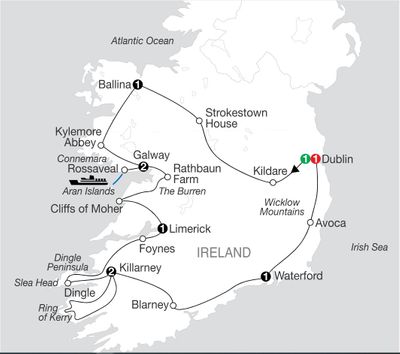 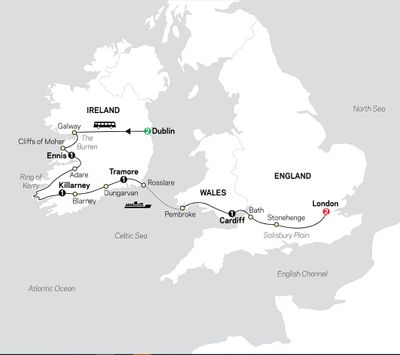 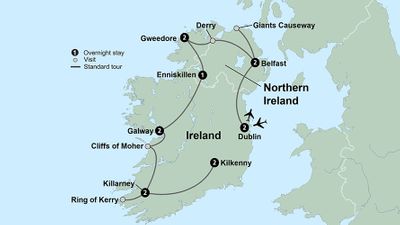 Destinations Dublin, Kilkenny, Waterford, Killarney, Limerick, Galway, Kingscourt View Tour Details
Use the search bar at the top to SEARCH for your preferred destinations
Processing...
You appear to be from