Crystal clear glacial lakes, snow-capped mountains and rolling Alpine hills, the Austrian countryside is as picture postcard perfect as a still from the Sound of Music

Austria has no shortage of storybook countries, and if you're favourite genre is romance, you're in luck. From the lakes to the mountains to the hills, Austria captivates everyone who visits.

Here, we visit the most romantic towns in Austria.

Millstatt is found on the north shore of the Millstatter Lake and is also surrounded by lush Alpine forest with stone and timber houses sheltering in a still water bay.

The Benedictine Millstatt was what brought people to this region in the 11th century, but the natural beauty and excellent weather has made it one of the most picturesque towns in the state of Carinthia. In the warm summer months, the lake is teeming with boats and swimmers as well as music lovers who flock here to take part in the famous annual Millstatt Music Weeks of choral, orchestral and chamber music performances.

Just a day trip away from Salzburg is the picturesque town of St. Gilgen (Sankt Gilgen), found on the shores of Lake Wolfgang and surrounded by Salzkammergut mountain range. This is truly Sound of Music country – and in fact where many of the outdoor shots were filmed. Milka cows, alpine yodelling and every wonderful impression of Austrian Alps can be found here. It is also where Mozart’s mother was born and where much of his family – including his sister and grandfather – worked and lived.

The colourful old buildings seem to have hardly changed in the last few centuries as this wealthy town because of the summer retreat for the rich of Salzburg to summer. The Christmas market at St. Gilgen is stunning and in the summer, a cable car ride to the top of the Zwolferhorn is unmissable.

On the banks of Lake Zell is the famous ski resort called Zell am See, just south of the city of Salzburg. It is popular with skiers in the winter thanks to the glacial mountains that keep snow on the slopes for longer than most of its lower-lying neighbours. The town itself has been inhabited since the Roman times but much of what is found today is from the 19th century, and the Romanesque Saint Hippolyte Church tower dates back to the 15th century.

During the summer months, people take boats out on the lake, and paddleboard and cool off in the crystal clear glacial waters. It is certainly worth enjoying a drink at The Grand Hotel with undisturbed panoramic views of the lake and the mountains.

Bad Gastein is a beautiful spa town that looks like it could have been lifted straight from a Wes Anderson film. A huge waterfall cuts through the centre of the town, rushing past magnificent stately buildings that have variously been used as hotels, residencies and treatment centres. Bad (meaning 'spa') Gastein has been known for its thermal springs and the healing waters have drawn the nobles and royalty since the 19th century. Thus the Belle Epoque style of architecture that was created to ensure the town was fit for a king. Even Marie Curie came here to research the radon in the water that is thought to help with ailments such as arthritis. Today, while still a spa resort town people also enjoy hiking and biking in the summer and skiing in the nearby mountains in the winter.

On the River Danube, the medieval town of Durnstein sits proudly in the shadow of its stunning medieval castle. Many cruises down the Danube will stop at this walled town to visit many of the historical sites that date back to the 10th century. One of which is the famous Durnstein Abbey – a tall tower, painted blue that has become a symbol of the Wachau Valley region. The town’s buildings show a lovely mishmash of Austrian architecture during the ages and the town is also happily situated in the centre of one of Austria’s most famous white wine regions. So enjoy a glass of Grüner Veltliner whilst watching the sun go down over the Danube.

It is law in Alpbach that all new buildings must be constructed in the traditional stone and timber style, with low sloping roofs to keep the heavy winter snow at bay. And therefore the town is bereft of any nasty new concrete and glass buildings that many other towns have fallen victim to.

This small town is not only one of the most impressive ski resorts in winter, in the summer the brightly coloured flower shows that residents put on are set off beautifully by the verdant hills, and attract not only visitors from around the world but also an annual European Forum for world leaders.

If ever there was a postcard-perfect village it is this one. Hallstatt is found in the Salzkammergut Mountains on the banks of the Hallstatter Lake. The village sits right on the clear waters of the lakes, flanked by lush green alpine mountains that turn into a snowy winter wonderland in the darker months.

Many of its gabled buildings date back to the 16th century including the ancient Church of Christ, whose spire is reflected on the lake’s still waters. Up until the 19th century it was only accessible by foot or boat meaning that much of its cobbled streets have remained in pristine condition for centuries. It is said to have been home to prehistoric Austrian’s who have lived on this site for millennia. It is now the country’s most visited town and the Chinese hold it in such high regard that they have made a billion dollar copy of the entire village in the Chinese province of Guangdong. 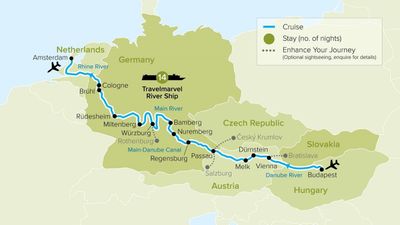 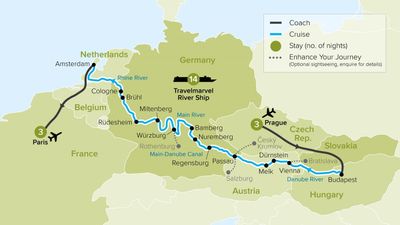 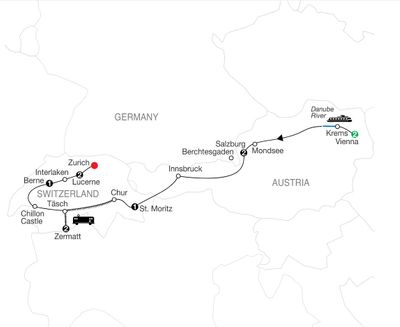 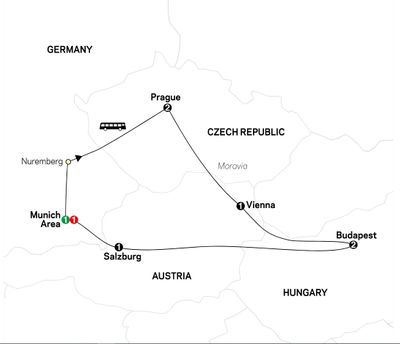 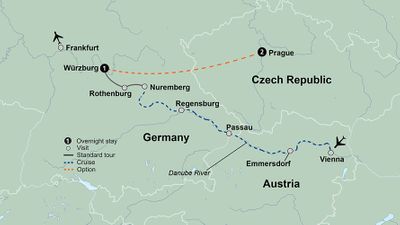 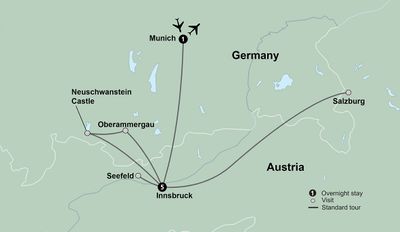 Destinations Vienna, Cesky Krumlov, Prague, Kraków, Budapest View Tour Details
Use the search bar at the top to SEARCH for your preferred destinations
Processing...
You appear to be from