With no road in or out of town due to its rugged terrain, Juneau is an island washed ashore on the mainland

Juneau is much like Alaska itself; vast, yet sparsely populated – the city is larger than the entire New York metropolitan area and four times the size of Melbourne, and home to just over 32,000 people. However, its population jumps by 20% when a cruise ship pulls into port and this small town manages to welcome over a million visitors every year.

The Gastineau Channel – which separates Juneau from Douglas Island – have been the Aueke and Taku tribes’ herring fishing grounds for thousands of years. The Russians never put down roots here and the first white settlers came after the end of the California gold rush when would-be prospectors migrated up the coast in search of their fortunes. Quebecois prospector, Joe Juneau, and his partner, Irishman Richard Harris struck lucky in Gold Creek, which runs through the east of the city. The town was briefly and blandly called ‘Harrisburg’ after one half of the duo, before the half won an 1881 vote among local miners, winning 47 of the 72 ballots cast by plying voters with drinks. Joe was subsequently swept up in the Klondike Gold Rush where, after blowing his fortune, he opened a restaurant in Dawson.

After his death, Juneau was brought back to Juneau and buried in Evergreen Cemetery, built to replace the city’s previous graveyard, which had – believe it or not – been turned into a gold mine.

Mount Juneau is far from the tallest peak in Alaska – in fact, it doesn’t even make the top 100 – but the contrast between the sea level city and the adjacent 1,090 m summit gives the impression it is dwarfed by its neighbour. Visitors can hike up to its peak by branching off from the Perseverance Trail from the city, but only very experienced hikers should try, as it’s a steep and treacherous route. Those that don’t fancy 5 kms of steep uphill while taking their lives in their hands can get up the next peak in as many minutes by taking the Mount Roberts Tramway. Near the top is the Timberline restaurant, which boasts arguably the best views of the city and surrounding mountains. Visitors can walk off their lunch by taking the trail to the summit (8 km round trip) or back down to town (6 km one way). The mountaintop also features an eyrie for injured birds, the Juneau Raptor Centre, where visitors can set their eyes on a bald eagle.

Just outside of town is another Juneau must-do, the 20 km long Mendenhall Glacier, one of the 40-plus large glaciers which drain from the 4,000 km2 Juneau Icefield. The well-maintained trails in the forest around it are a great place to spot local wildlife, such as black bears, porcupines, beavers, bald eagles, and salmon. Those who want to stay on the flat or ride a bike should head to the 16 km Herbert Glacier Trail as its gravel path and tall tree cover make it a good option for a rainy day.

The city’s compact downtown makes for a great night out without the need to take a cab everywhere – although the city now has pedicabs – as the bars are all within crawling distance. Local notables include Tracy’s King Crab Shack, which boasts it has the state’s best crustaceans, the Alaskan Bar & Hotel, and the city’s oldest bar, the Imperial Saloon, which opened in 1891.

Those in search of a bit of spirituality, or just an afternoon out in the lush Tongass National Forest – yes, the nation’s biggest – should head 20 miles north out of town to the National Shrine of St. Therese, honouring Alaska’s patron saint, the French Carmelite nun known as the 'little flower of Jesus.' With its beautiful forest-fringed stone chapel with a causeway running across the water to Shrine Island, it is reminiscent of the monasteries Vikings used to regularly pillage in northern England. However, it is now open to all faiths as a place of prayer and meditation in keeping with her message of "what matters in life is not great deeds, but great love."

Culture vultures should seek shelter in the Alaska State museum which has an impressive collection of Native American art and artefacts, exhibits from the region’s time under imperial Russian rule, as well as a treasure trove of trinkets from its more recent time as the US’s wildest and most western frontier. The highlights of the collection include prehistoric Eskimo ivory carvings and watercolour by William Ellis, the artist who documented much of famed British explorer, Captain Cook’s journey through the Pacific Northwest.

Also visit the Sealaska Heritage Institute, which is dedicated to preserving the art and culture of the native peoples of Southeastern Alaska; its exhibits include an authentic clan house and its gift shop sells only the most authentic locally-made souvenirs. 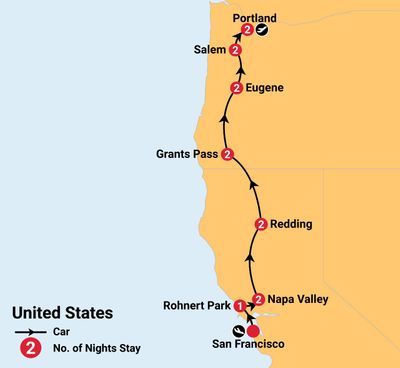 From
£726 pp twin share
GBP
Book Now View Details
LOAD MORE Use the search bar at the top to SEARCH for your preferred destinations
Processing...
You appear to be from