Most recently known for its cameo in Game of Thrones, Seville is a historical hotspot full of architectural wonders

The sun-drenched southern city of Seville is a dream destination for film and television buffs, history and architecture nerds, and flamenco fans alike. Located along the Guadalquivir river, Seville is a bustling port and the capital of Andalusia, the autonomous region of southern Spain that includes Córdoba and Málaga. Seville has an ancient multicultural history: it was originally founded as a Roman city, ruled by a Muslim Caliphate, and taken over by 13th century Christians. Locals are called sevillanos or sevillanas.

Some of Seville’s best-known neighbourhoods are Triana and Santa Cruz, both of which have their own distinct cultures. Triana once included many Romani residents, who lived in communal structures called corrales; the neighbourhood itself is known for its museums, local festivals, vibrant arts and crafts (especially pottery), as well as flamenco. Santa Cruz – considered the old Jewish quarter of the city – is a charming maze of narrow streets, intimate squares, and beautiful buildings – it’s also home to Seville’s biggest tourist draw: its enormous Gothic cathedral.

Visit the largest cathedral (and Gothic church) in the world: the Cathedral of Saint Mary of the See, commonly known as Catedral de Sevilla (Seville Cathedral). This sprawling monument was built in the 16th century and houses the remains of Christopher Columbus and his son, Diego. Its Mudéjar (Moorish-Christian) Giralda Belltower is one of its most jaw-dropping features, and was originally part of an ancient mosque built by the previous ruling Moors.

Drift over to the Parque de María Luisa, a stunning green spread of fountains, pavilions, and exotic flora designed by the French landscape architect, Jean-Claude Nicolas Forestier. Nestled on the edge of the park is the Plaza de España. Built for the 1929 Ibero-American World Expo by renowned architect Anibal González, this long, half-moon shaped complex combines a range of iconic architectural styles, with tiled alcoves that represent different parts of Spain. Movie buffs might recognise it from Lawrence of Arabia, Star Wars Episode II, and The Dictator. The Alcázar Palace is another fantastic spot – this 14th century Mudéjar monument was the setting for the Dornish Water Gardens in Game of Thrones, and is a UNESCO World Heritage Site.

There’s also a modern side to Seville – swing by the Metropol Parosol (also called Las Setas, or 'the mushrooms'), which is allegedly the world’s biggest wooden structure; its breathtaking cross-beamed design contains a plethora of eateries, bars, a museum, and even plays host to concerts.

Andalusia claims to be the home of tapas, so there’s really no better place to swing by a tapas bar (or three), especially in the neighbourhood of Santa Cruz. Many foodies claim that Seville is the 'tapas capital' of Spain, where one can truly indulge in tapear or (tapas bar-hopping). Small shared plates are perfect for visitors on-the-go who want to taste a bit of everything, along with a nice, cold beer. Popular tapas bars can get a bit crowded, but when in Rome, just squeeze in with the Romans (or rather, the sevillanos) and soak in the atmosphere. 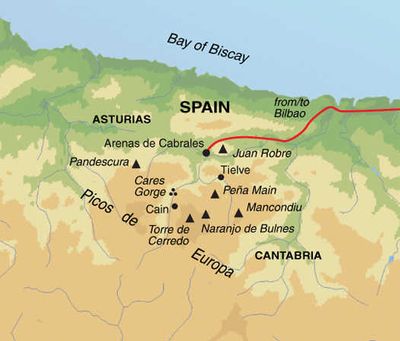 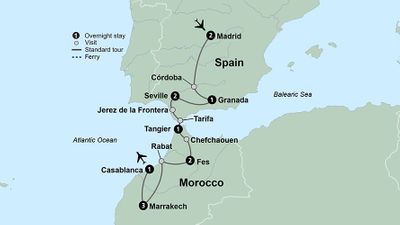 Destinations Madrid, Granada, Seville, Málaga, Tangier, Fes, Rabat, Marrakech, Casablanca View Tour Details
Use the search bar at the top to SEARCH for your preferred destinations
Processing...
You appear to be from