With its immense historical significance, sacred sites and fair share of political controversy, Israel is one of the most fascinating countries in the world. Its capital Jerusalem is steeped in history and home to three of the world’s holiest religious sites: the Temple Mount, the Wailing Wall and the Church of the Holy Sepulchre, attracting Muslim, Jewish and Christian pilgrims from across the globe. Walk the streets of modern Tel Aviv and you’ll see grand synagogues beside humble churches and reflective high-rises, interspersed with trendy cafes.

The country’s modest size encourages exploration, allowing travellers to feast on a breakfast of coffee and shakshuka (baked eggs) in the coastal town of Eilat, stop for a dip in the dead sea and make it to the Mediterranean city of Haifa by sunset. Along the way, watch as deserts dotted with ruins roll into valleys and bustling cities. Israel is one destination you’ll never forget.Click here to learn more about when is the best time to visit Israel. 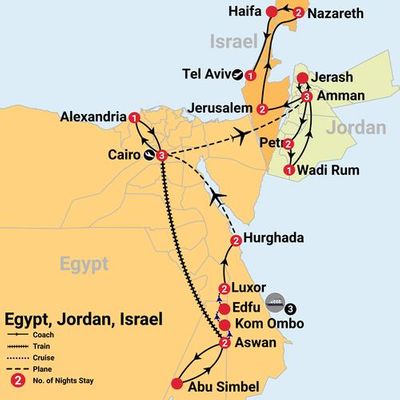 Travelling to Israel for the first time? Here’s everything you need to know before you go When to go July-August is the peak season for visitors, along with the Jewish festival of Passover, falling towards the end of March and beginning of April. The southern half of Israel is mainly desert and is hot and arid year-rou...

The Jesus Trail is a 65 km hiking and pilgrimage route - take in the route Jesus may have walked For some, walking Israel’s Jesus Trail is the opportunity to retrace Jesus’ steps across Galilee; for others, it’s a chance to take on a four-day, sun-bleached trek connecting Nazareth, the Sea of Galilee, the Horns of Hatt...

The jewels in Israel’s crown are yours for the viewing Beguiling deserts, astonishing beaches, archaeological sites and all that history, combine to give the most meaningful of travel experiences in a country just a tenth the size of Victoria. Sea salt and socialism Four hundred and 31 metres below sea level, the turqu...

When is the best time to visit Israel

With some of the world’s most significant history, sacred sites and richest cultures in the world, Israel is one of the most fascinating countries you could visit. But, when is the best time to go? While any traveller to Israel is sure to encounter the significant religious sites, stories and complex politics, these f...