Everything you need to know about: Inti Raymi

This winter solstice festival is a cultural highlight in Peru

The history of Inti Raymi

An important part of Peru’s cultural heritage, Inti Raymi is celebrated throughout the former Incan Empire on 24 June. Originally a nine-day tribute to Inti, the Incan sun god, and Pachamama, the mother earth goddess, it dates back to the 15th century and the reign of Incan leader Pachacutec, who expanded the kingdom across Central and South America.

Inti Raymi is regarded as the most important Incan festival because it is designed to honour the sun in order to ensure a good harvest for the months ahead. In modern times, Inti Raymi carries the added importance of celebrating a previously suppressed part of Incan culture. Banned by Spanish colonisers from being officially celebrated in the mid-16th century, the tradition was revived from the writings of Inca Garcilaso de la Vega, a famed historian and illegitimate son of a conquistador and a royal Inca mother, in 1944. It now forms a celebration that incorporates Incan history and theology, music, dance and cuisine.

Inti Raymi in Peru centres around a festival in the Incan capital of Cusco – the largest Inti Raymi celebration in of all of Central and South America. Thousands of people congregate to watch the climactic gala at the ruins of the Sacsayhuaman archaeological site, where hundreds of participants recreate a historic ritual. The site actually predates the Incans and was initially constructed by their predecessors, Peru’s Killke culture. However, the Incans expanded and fortified Sacsayhuaman, cementing its status as part of their heritage.

Central to the performance is an Incan emperor, bedecked in gold and ceremonial dress, being carried to the site by subjects in order to pay tribute to Inti. Participants don costumes featuring feathers and the bright rainbow colours of the Inti Raymi flag, as the emperor pours out the traditional maize-drink chicha as an offering, along with the now-simulated sacrifice of llamas to ensure a successful spring and subsequent harvest.

These rituals are accompanied by traditional song and dance, and painstakingly reconstructed to simulate life during the Incan civilisation.  Even the ceremonial addresses are delivered in Quechua, the language spoken by the Incans that is still retained in various countries across its former empire.

Perhaps the best way for visitors to enjoy Inti Raymi is to simply soak up the spectacle. The day-long celebration in Cusco begins at Coricancha historical site – a temple that translates to the 'Golden Palace', such was its grandeur during the days of the Incan Empire. From here the dancing and music commences, as the 'Emperor' emerges and begins the procession to Plaza de Armas, a downtown hub of restaurants and historic buildings from the colonial period. Here, there’s a chance to witness another performance and tribute to the gods, the cocoa leaf ceremony, before the performance and the parade continues on to the ruins of the Sacsayhuaman temple. The festivities at Sacsayhuaman conclude with a ceremonial bonfire and a parade back into Cusco.

The ceremony of Inti Raymi isn’t the only thing in Peru that has survived from Incan times. Synonymous with the festival is the dish chiriuchu, also known as 'cold spice'. The ancient grain parched corn is combined with cooked meats and vegetables, forming a hearty dish served cold. Everyone from street vendors to restaurants will be selling it. Modern equivalents are cooked with the popular Peruvian grain quinoa.

During the ceremonies themselves, expect to be flanked by locals cooking up their own food in a huatia – a traditional earth or hive oven. These are used for simple meat and potatoes dishes, drawing from the ground in keeping with the spirit of Inti Raymi. Whatever you end up eating, be sure to wash it down with chicha morada, a vibrant purple corn drink that, like Inti Raymi, is something of a national institution.

Given that Inti Raymi attracts about 50,000 visitors to Cusco each year, it’s best to pre-book a space to get a good view of the festivities. The ceremony starts at 8am and finishes at about 4pm.

At Coricancha, it’s best to arrive early in order to secure a vantage point, while at Plaza de Armas the abundance of restaurants and cafes – many of which have first-floor views – means that careful planners can book a table above the crowds to avoid straining for a view. The ceremony at Sacsayhuaman is a ticketed event, so, again, book early – or try your luck in among the locals at parks overlooking the site.

More generally, adjusting to altitude in Cusco can be difficult. Visitors may experience mild headaches and shortness of breath on occasion – if these symptoms persist or intensify, do not hesitate to seek medical advice.

Finally, even though this festival is in June, it’s also the end of winter in Peru – so check the weather forecast and be sure to wrap up warm if spring is running a little late. 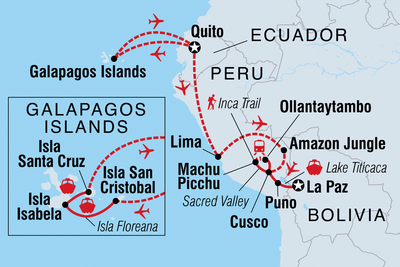 From
$4,607 pp twin share
CAD
View Details
Use the search bar at the top to SEARCH for your preferred destinations
Processing...
You appear to be from