Kilkenny is one of those beautiful towns that lives up to all expectations of a stunning medieval Irish town. Known as Marble City, due to the flagstones that have been polished to a bright shine from the footsteps of a thousand years of pilgrims and monks, warriors and soldiers. Grey limestone buildings house ancient almshouses and modern restaurants and are crammed along the narrow lanes that flank the River Nore.

In the 6th-century, Saint Canice came to the shores of the River Nore to build a monastery, and it is from this that the town found its name – Kilkenny means ‘Church of Canice’. Although the original wooden monastic buildings are long gone, the 9th-century round tower still stands beside the stone 13th-century cathedral that we can see today. Brave visitors can climb the 100 narrow steps to the top of the 30 metre-high tower. Along the way ornate stonemasonry can be seen, showing how important this cathedral was during medieval times.

Further along the river is Kilkenny Castle, which was built by the legendary Norman conqueror Strongbow in the 12th-century. What started out as a wooden watchtower was modernised with stone by Strongbow’s son-in-law. In 1391 the wealthy Anglo-Norman landowners, the Butler family bought the castle where they remained until 1935. The castle was finally sold in 1967 to the city for a mere £50 as the cost of keeping the castle became too much for the Butlers. Portraits of members of the Butler family can be seen along the impressive Long Gallery, which also has a roof painted in an impressive number of local and international styles.

Joining up the Castle and the Cathedral is a series of narrow cobbled streets known as Medieval Mile due to the ancient buildings and the historical relevance to the city. Much can be learnt about this history of the town through buildings such as the Tudor-era Shee Alms House that housed the sick and poor.

Nearby the Castle is St Mary’s Church, which is home to a fascinating museum about this historical area, and an interactive map allows you to see old maps and documents of the city giving an impression of what the town looked like throughout the ages.

Kilkenny was also the site of the first and only witchcraft trials. Alice Kyteler, innkeeper and moneylender, was accused of witchcraft after the death of several of her four husbands from whom she had amassed a small fortune. The collapse of the Cathedral’s church tower in 1332 was also attributed to Alice’s witchcraft. Luckily for Alice, she managed escaped to England before her execution but less luckily for her maid, who was flogged and burnt at the stake in her absence.

The Cathedral’s relics document much of this town’s history. Among the many grave slabs that can be seen in the Cathedral is one of Jose de Keteller who died in 1280 and was thought to be the Flemish father of the witch Alice. The Cathedral also is home to a number of tombs including many from members of the Butler family.

Today Kilkenny is known as a town of the arts with Kilkenny Arts Festival, Cat Laughs Comedy Festival and Kilkenny Roots Music Festival all still attracting pilgrims looking for a cultural fix. 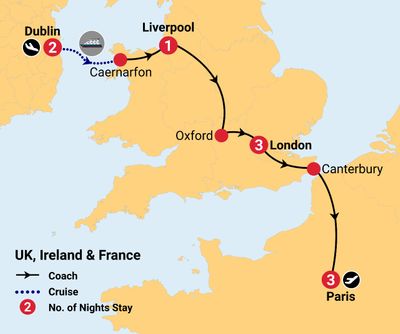 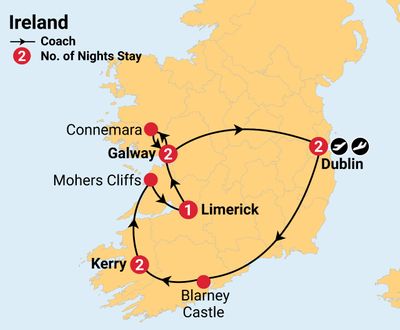 Destinations Dublin, Cliffs of Moher, Limerick, Galway, Sligo, Derry, Belfast View Tour Details
Use the search bar at the top to SEARCH for your preferred destinations
Processing...
You appear to be from