Although its North Atlantic location may make it one of coldest capital cities in Europe, Reykjavik provides a warm welcome for visitors keen to experience its rich Nordic history, bold art and architecture, and stunning natural landscapes. If you plan to do a lot in one day, invest in one of Reykjavik’s City Cards – 3,900 ISK (A$47) for adult and 1,600 ISK (A$20) for children – which include admission to many of the city’s museums, its thermal pools and a variety of other attractions.

Reykjavik’s compact size means that much of it is walkable, with two of its most notable links to its past – the Settlement Exhibition and the National Museum of Iceland – only 10 minutes’ apart along Suðurgata, one of the streets that borders its downtown area. Constructed around the historic site of a Viking longhouse, the Settlement Exhibition was inspired by an excavation in 2001 that uncovered one of the oldest houses in the country. Admission is ISK 1,700 (A$20) for adults but free for children, who can enjoy its family-friendly play areas and interactive displays that bring the past to life.

The National Museum of Iceland has a comprehensive history of Iceland on display, with more than 2,000 artefacts. English-language guides are included in its ISK 2,000 (A$24) entrance fee for adults (here children are also admitted for free), both in person at 11am on Saturdays, Sundays and Wednesdays, and via an audio-guide available on smartphones at any time. Its most famous piece is the Valþjófsstaður door, an imposing carved wooden edifice from the medieval era that draws its imagery from the famed sagas that comprise Iceland’s folklore. Young visitors may not be able to manage to carve a door during their stay, but the museum offers one-off activities and workshops such as whittling courses for them on a seasonal basis.

Visitors who want to enjoy some of Reykjavik’s modern architectural features are best served by its downtown Church of Hallgrímur – for ISK 1,000 (A$12) you can scale its 74 m tower to enjoy offers panoramic views of the city – and Harpa, the waterfront concert hall that catches the eye and the light thanks to its glass-panelled geometric structure. A guided tour for 1,750 ISK (A$20) is also a trip through a recent turbulent spell in Iceland’s history, when the 2008 financial crisis called for a rethink of the site’s purpose.

From there, Reykjavik’s waterfront is another prime location to enjoy some stunning scenery – and it’s only a short walk from the shopping district of Laugavegur, where you can beat the elements by wrapping up in local brands such as 66°North’s clothing. There is also a variety of dining options, from the Michelin-starred Nordic cuisine of Dill to the Hlemmur Mathöll food hall and Norstra, where vegan options sit alongside pescatarian dishes fished from the surrounding seas.

Save your energy to sample the nightlife, which often doesn’t get started until midnight. From the cocktail bars of Loftid and Bar Ananas to its livelier nightclubs, Reykjavik can keep its inhabitants entertained until the (Northern) morning light. 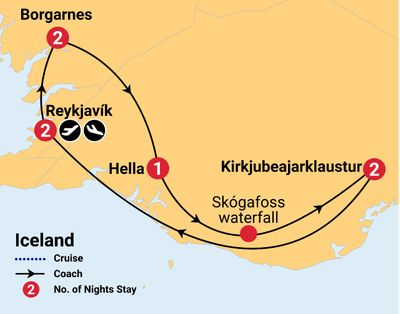 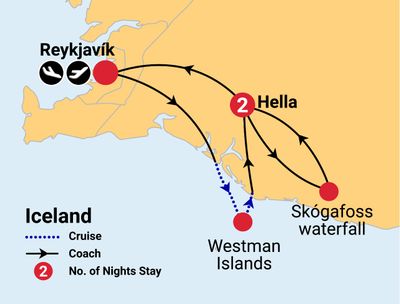 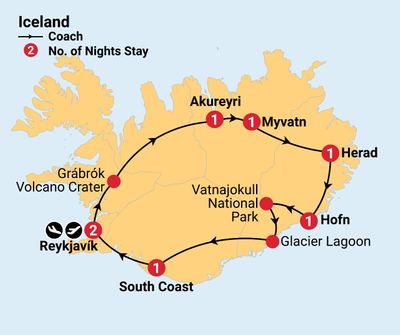 Destinations Reykjavík, Akureyri, Myvatn, Herad, Hofn View Tour Details
Use the search bar at the top to SEARCH for your preferred destinations
Processing...
You appear to be from