Home to Mozart and the Sound of Music, Salzburg is one of the most beautiful towns in all of Europe thanks to its Baroque architecture, hilltop fortress and fairy tale Christmas market

Salzburg is among the most beautiful towns in all of Europe – a true fairy tale town that is known as the Rome of the north. With Baroque architecture dominating much of the 17th century buildings the homes, churches and gardens here are wonderfully preserved and seeped in culture.

It’s not entirely surprising that a young man named Wolfgang Amadeus Mozart who was born in this town in 1756 went on to become one of the most loved composers of the millennium. The flowing river and lush mountains in spring or the icy streets and snow-covered roofs of winter – it is hard to not be inspired by the natural beauty and majesty of this town.

The name Salzburg means "Salt Castle" as ships carrying salt, mined from the Bavarian Alps in the 8th century, used to sail down Salzach River stopping at the castle to pay their tolls. The town gained its independence from Bavaria in the 14th century and from the 16th to 18th century grew rich, bringing Italian-trained architects to the town who built palaces in the Baroque style for the wealthy – and labelling it the Rome of the north.

More recently after the fall of the Austro-Hungarian Empire, it was annexed by Austria, Nazi Germany and then returned to Austrian control again but managed to escape the worst of Allied bombing during WWII.

The old town sits deep below the high mountains, and beside the fast-flowing Salzach River under the dramatic fortress that watches over the town. Called the Festung Hohensalzburg this clifftop fortress is over 900 years old and is worth the 15 minute walk (or a short ride in the glass funicular) up to explore its ramparts, view the river and stand in awe of the mountain backdrop.

In the old town is Chapter Square – a great place to watch locals play chess, tourists take horse-drawn carriages around or simply enjoy the views of the Fortress from below. The town is soaked in palaces and castles with the Schloss Hellbrunn being one of the most magnificent. Built as a summer palace by Prince-archbishop Markus Sittikus, its aim was to act as a garden of Eden, where rulers could eat, drink and be merry in the gardens and fountains, away from the watchful eye of the rulers in the main Residenz Palace and the royal courts.

The Christmas market at Salzburg is among the most romantic in the world. Dating back over 500 years it sits in front of the cathedral with the Fortress in the background.

In summer months, fans of the film the Sound of Music will be pleased to know that many of the original locations from the film are still open to visit including the Benedictine monastery Nonnberg Abbey, where Maria von Kutschera was a novitiate; Leopoldskron Palace, Residenz square and fountain and the famous Sound of Music Pavilion found in in the Park of Hellbrunn Castle – but of course there is an app that can be downloaded to discover all the sites and plenty of tours on offer too. Many of the scenes were also shot in the neighbouring towns and villages of St. Gilgen and St. Wolfgang. 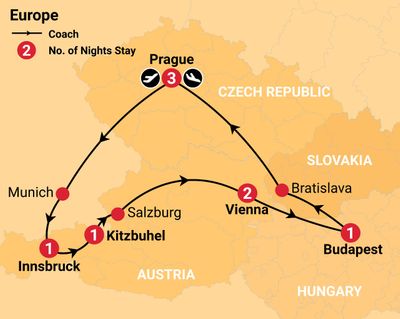